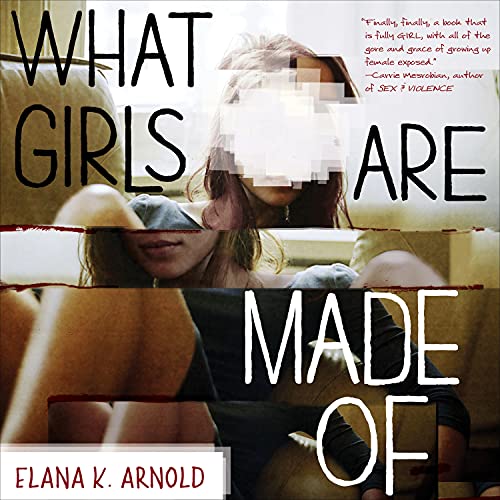 What Girls Are Made Of

When Nina Faye was 14, her mother told her there was no such thing as unconditional love. Nina believed her. Now, she'll do anything for the boy she loves to prove she's worthy of him. But when he breaks up with her, Nina is lost. What is she if not a girlfriend? What is she made of? Broken-hearted, Nina tries to figure out what the conditions of love are.

Limited time offer!
Save 47% on your first 3 months!
Get started
Learn more about membership
List Price: $28.21
You Save: $3.53 (13%)
By completing your purchase, you agree to Audible's Conditions Of Use and Amazon's Privacy Notice. Tax where applicable.
Sold and delivered by Audible, an Amazon company

4.5 out of 5 stars
4.5 out of 5
49 global ratings
How are ratings calculated?
To calculate the overall star rating and percentage breakdown by star, we don’t use a simple average. Instead, our system considers things like how recent a review is and if the reviewer bought the item on Amazon. It also analyzes reviews to verify trustworthiness.
Top reviews

LJBentley
3.0 out of 5 stars Bold
Reviewed in the United Kingdom on December 5, 2018
Verified Purchase
What Girls Are Made Of by Elana K. Arnold was probably the most striking book that I read this year. In stark contrast to any young adult fiction that I have read before, this book opens up the question about female sexuality and how teenagers begin to explore this.

It is unapologetically bold in its delivery and the elements of art history add a layer of depth to the story.

I really enjoyed What Girls Are Made Of as it is the sort of story that stays with you long after reading. I don’t know if you can automatically tell if you like the actual story but its resonance indicates that it has had an impact on you.

What Girls Are Made Of by Elana K. Arnold is available now.
Read more
Report abuse

Kellie
5.0 out of 5 stars Perfection
Reviewed in the United Kingdom on November 18, 2020
Verified Purchase
I'm not sure if Elana K. Arnold would be happy to hear this book described so, but honestly, it is! It's such an angry, needy, yet hopeful examination of what it is to be a girl. Not a nice girl. Not a perfect girl. Just a glorious normal girl.

I've definitely said it before, but Elana K. Arnold is my favourite contemporary author. Not just of YA, but of every age group and genre. She's stellar.
Read more
Report abuse

Chaoslaborantin
4.0 out of 5 stars Challenges the taboos surrounding the female body
Reviewed in Germany on October 18, 2019
Verified Purchase
"When people don't have words to describe what they're experiencing," Mom said, "they think it's magic. Or mystical."
-Page 89

It comes down to this sentence to describe this book. Nina, the protagonist, seeks her place as a young girl in the world, and has to face her internalized misogyny and the taboos surrounding the female body. At times, it seems like she prefers to think of her body in the way her mother describes it above - as something mysterious, unfathomable. The way how Nina breaks with this mindset by experiencing herself in different ways is quite well done and shows subtly but insistently that it's better to know yourself and your body instead denying it and rely on others to define yourself.

It reminded me of another book I've read recently in this regard, "The Confession" by Jessie Burton, which has a woman in her thirties going on a mental journey to explore herself, her wishes and also her own aimlessness and has her accept all of that. Only that "The Confession" has a lot less dramatic imagery and stylization (and also features queer main characters instead of the mere diverse background token characters in Arnold's book).
In short, "What Girls Are Made Of" is a little over the top and remote from everyday life, especially in the first quarter where it seems like every scene, every sentence is some comment on sex, sexualization, misogyny, the patriarchy etc. I think Arnold covers this allegoric style a lot better in her other book, "Damsel"; in which the fairy tale character of the book welcomes the stylized writing a lot more and has the main character challenge the system from the start, while "What Girls Are Made Of" sometimes lacks the bound-to-earthness of a contemporary story. It's a little too cliché in places, like with the educated and unhappy housewife mother and the father who is literally never present. Also, a few scenes left me wondering if it is truly only the partriarchy that has wronged Nina or something is off with her personally (no offense, that applies to me as well), like how intense she's influenced by every little thing, EG when she blames the largeness of their house for her mother's miscarriages although she knows about their medical reasons, or how hard it is for her to find meaning in life when she's alone just for a moment. But the possibility of mental illness is never really touched upon, so I assume Arnold only tried to be a little more edgy.

An interesting part is the journey to Italy and the contemplation of art - which felt very relatable to my own journeys there - including the thoughts on martyred and virgin female saints, something I've never thought about much. The book shifts the attention away from the holiness and calls out the sexualized violence committed against those women which felt like more than due - although I missed a comment on how her virginity doesn't make a woman more "holy" than one who's sexually active (but as the main character is sexually active and the book doesn't slutshame, the thought is implied). That journey is also the only time when mother and daughter ever connect with each other and it's both shocking and fascinating to see how Nina's mother would only give her occasional gruesome life advice and then goes on to ignore her and even deny she said anything of the sort. As bad as it sounds, it never feels false, only accurate. Because many mothers/older women might feel exactly like that, as if they can reveal on their trauma only in metaphoric glimpes.

Totally unreliable trigger warning (as there's many other triggering content in this book as well): Obscure bird metaphors that I started to skip over because everything avian creeps the hell out of me.
Read more
Report abuse