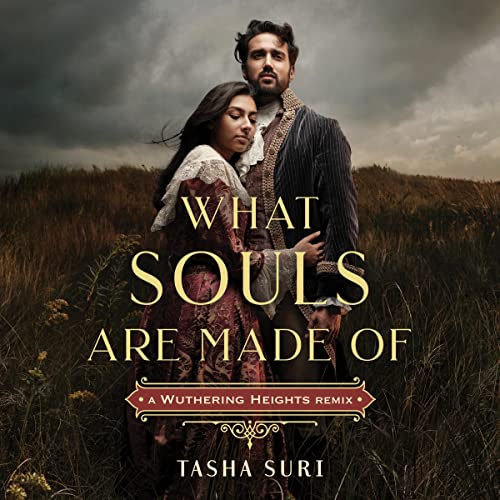 What Souls Are Made Of: A Wuthering Heights Remix (Remixed Classics, Book 4)

"With its brooding characters, gorgeous setting, and a romance that sparkles with electricity, this retelling of Wuthering Heights breathes fresh air into an old classic."—Stacey Lee, New York Times-bestselling author of The Downstairs Girl and Luck of the Titanic

"Hopeful and heartbreaking, this remix of Brontë’s classic is a magnificent, beautifully written ode to love, family and belonging.”—Sangu Mandanna, author of The Celestial Trilogy and Kiki Kallira Breaks a Kingdom

4.3 out of 5 stars
4.3 out of 5
16 global ratings
How are ratings calculated?
To calculate the overall star rating and percentage breakdown by star, we don’t use a simple average. Instead, our system considers things like how recent a review is and if the reviewer bought the item on Amazon. It also analyzes reviews to verify trustworthiness.

r2g
5.0 out of 5 stars Incredible!!
Reviewed in the United States 🇺🇸 on July 17, 2022
Verified Purchase
I adored this remix of Wuthering Heights! I’m a huge Tasha Suri fan, and I was curious about how she’d take on a non-fantasy novel. I shouldn’t be surprised that in What Souls Are Made Of, she crafted an exquisite reimagining of Wuthering Heights.

It’s clear that an incredible amount of research and care went into this novel, but it never feels bogged down. Rather, I was swept away by Cathy and Heathcliff — not only their love story, which is beautifully swoony, but also the incredible arcs that Suri gives each character. Imagining them as having Indian backgrounds deepens their stories and, in my opinion, only improves on the classic.

And, as usual, because this is a Tasha Suri novel, the prose is stunning.

Overall, I would say that however you felt about Wuthering Heights, What Souls Are Made Of is a must-read.
Read more
4 people found this helpful
Report abuse
See all reviews