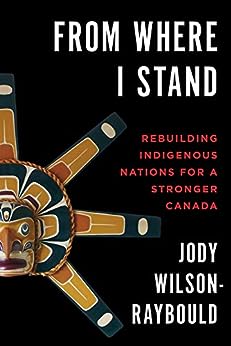 From Where I Stand: Rebuilding Indigenous Nations for a Stronger Canada Kindle Edition

by Jody Wilson-Raybould (Author) Format: Kindle Edition
See all formats and editions
Sorry, there was a problem loading this page. Try again.
An Indigenous leader who has dedicated her life to Indigenous Rights, Jody Wilson-Raybould has represented both First Nations and the Crown at the highest levels. And she is not afraid to give Canadians what they need most – straight talk on what has to be done to move beyond our colonial legacy and achieve true reconciliation in Canada. In this powerful book, drawn from speeches and other writings, she urges all Canadians – both Indigenous and non-Indigenous – to build upon the momentum already gained or risk hard-won progress being lost. The good news is that Indigenous Nations already have the solutions. But now is time to act and build a shared postcolonial future based on the foundations of trust, cooperation, recognition, and good governance.
Read more
Previous page
Next page

The story of this ongoing narrative is of a cultural bridge disrespected in bias against gender and culture and, with her, all of us ingenuous in our optimism, we feel the tragic loss of an opportunity squandered. -- Linda Rogers ― The Ormsby Review

Jody Wilson-Raybould was not only born to be a leader but accepted the role as her responsibility, and she has fulfilled it with honour and grace and courage. There is no one better-suited to reflect on the shared future of Canada and what needs to be done to make reconciliation a reality in this country. -- from the foreword by The Honourable Murray Sinclair, member of the Senate of Canada, and former Chair of the Truth and Reconciliation Commission of Canada

JWR is on target. This must-read book speaks about our journey to an Indigenous Quiet Revolution.

Writing from both the Big House and the House on Parliament Hill, Jody Wilson-Raybould offers unique and profound perspectives from two worlds. In this book, she maps out how First Nations can overcome the struggles of the colonial world and move toward a self-determined future in a world that is better for all. Jody’s vision is clear, and her voice is essential for understanding the urgency needed for colonial and First Nations governments to develop both the political will and the commitment to action needed for a better Canada.

Canadians came to understand Jody Wilson-Raybould’s passion and commitment for judicial and political reform through her work as the federal Minister of Justice. Behind her engagement in the cut and thrust of politics, however, lay one of the country’s most informed and thoughtful minds. In this much-anticipated book, Wilson-Raybould explains the cultural and historical roots of Indigenous hurt, anger, and despair. But true to her nature, she also offers the country a practical, reasonable, and viable path towards real and lasting reconciliation. This is a brilliant view of what is both possible and necessary.

-- Ken Coates, Canada Research Chair in Regional Innovation, and co-author of From Treaty Peoples to Treaty Nation: A Road Map for All Canadians

From Where I Stand is a must-read book for all Canadians. Puglaas shares a clear understanding of where we have come from, the issues we must address, and the pathways to a transformed future. Having witnessed her remarkable courage and capacity as Canada’s attorney general and her determination to do what is right without succumbing to unrelenting political pressure, Puglaas stands tall among Canadians as a person for whom truth, thoughtfulness, and principle are not mere words – but values to sustain a different kind of policy and politics.

Jody Wilson-Raybould’s quest for justice has long driven her work. I first saw this when she was a law student and this commitment to justice has only been deepened by subsequent public service. Her unwavering commitment to reconciliation, balance, and good governance springs off every page of this book. -- John Borrows, Canada Research Chair in Indigenous Law, University of Victoria Law School --This text refers to the paperback edition.

The Honourable Jody Wilson-Raybould, PC, QC, MP, also known by her initials JWR and by her ancestral name Puglaas, is a lawyer, advocate, and a proud Indigenous Canadian. She is a descendant of the Musgamagw Tsawataineuk and Laich-Kwil-Tach peoples, which are part of the Kwakwa̱ka̱’wakw or Kwak’wala-speaking peoples, and she is a member of the We Wai Kai Nation.

Throughout her career, Ms. Wilson-Raybould has built a strong reputation as a bridge builder between communities and a champion of good governance, justice, and accountability. She was elected as the Member of Parliament for the new constituency of Vancouver Granville in October 2015. On November 4, 2015, she was appointed the Minister of Justice and Attorney General of Canada, making her the first Indigenous person to serve in this portfolio. She then served as Minister of Veterans Affairs from January 14, 2019, to February 12, 2019.

Prior to entering politics, she was a provincial Crown prosecutor in Vancouver and later served as an adviser at the BC Treaty Commission, a body established to oversee complex treaty negotiations between First Nations and the Crown. In 2004, she was elected as Commissioner by the Chiefs of the First Nations Summit.

In 2009, Ms. Wilson-Raybould was elected BC Regional Chief of the Assembly of First Nations, where she devoted herself to the advancement of First Nations governance, fair access to lands and resources, as well as improved education and health care services. She was re-elected as Regional Chief in 2012 and served until 2015, holding responsibilities for governance and nation building on the Assembly of First Nations National Executive. Ms. Wilson-Raybould also served two terms as an elected Councillor for the We Wai Kai Nation between 2009 and 2015.

An active volunteer in the community, Ms. Wilson-Raybould has been a director for Capilano College, the Minerva Foundation for BC Women, the Nuyumbalees Cultural Centre, and the National Centre for First Nations Governance. She was also a director on the First Nations Lands Advisory Board and Chair of the First Nations Finance Authority.

Ms. Wilson-Raybould lives in Vancouver and is married to Dr. Tim Raybould.

This is the book that all Canadians – both Indigenous and non-Indigenous – need to read if we want to make reconciliation and strong, healthy Indigenous Nations a reality in this country.

--This text refers to the paperback edition.
Read more

4.6 out of 5 stars
4.6 out of 5
65 global ratings
How are ratings calculated?
To calculate the overall star rating and percentage breakdown by star, we don’t use a simple average. Instead, our system considers things like how recent a review is and if the reviewer bought the item on Amazon. It also analyzes reviews to verify trustworthiness.
Top reviews

Amazon Customer
4.0 out of 5 stars Speeches made by JWR over a 10-year span
Reviewed in Canada on October 17, 2019
Verified Purchase
This book is a series of speeches or addresses made by JWR to differing forums, often Indigenous. Each address is clearly and crisply laid out. Her aim is to implement the United Nations declaration of the rights of indigenous peoples (UNDRIP) in Canada. So much is laudable.
One of the problems with the format is the implicit considerable and tedious repetition. Another is that the lay (non-legal) public, like myself, are not familiar with legal declarations such as UNDRIP and section 35 of the Charter for Canada.
JWR clearly has a fine brain and a real grip on the issues. But, by excising the repetition and giving statements of UNDRIP, section 35 and so forth, with discussion, the book would be much more accessible to lay readers like myself.
I have great admiration for her courage and honour as the Attorney General of Canada and contempt for her treatment by the Liberal Party of Canada and its leader.
I am troubled by signs of rigidity in certain statements that she makes in the book, such as 'Chiefs are always men' and so on. The Indigenous peoples themselves should be given the opportunity by their leaders to show flexibility in creating their own rules and laws.
Read more
6 people found this helpful
Helpful
Report abuse

David Keay
2.0 out of 5 stars Don’t try and rehash old speeches and pass it off as a book
Reviewed in Canada on January 5, 2021
Verified Purchase
I like Ms Wilson Raybold and believe she has something to say, but I don’t think the format of a few old speeches is the way to go. I liked her chapter headings and thought she was going to say something both profound and interesting. But I was mistaken. If she had taken the subjects she was trying to express and just written a book, I believe I would have learned more.
Read more
3 people found this helpful
Helpful
Report abuse

Cat S.
5.0 out of 5 stars Such an important voice
Reviewed in Canada on December 27, 2020
Verified Purchase
This is collection of Jody Wilson-Raybould's speeches is a wonderful way to get to know her valuable and distinct point of view. She eloquently lays out issues facing Indigenous Peoples in Canada and offers solutions too.
Read more
2 people found this helpful
Helpful
Report abuse

Matthew Hogan
5.0 out of 5 stars Powerful Book
Reviewed in Canada on October 22, 2019
Verified Purchase
The book isn't super political like one might expect from a person who just got kicked out of a political party. Powerful read. Real strong Aboringal issues and methods to start solving those issues. I have many of my friends wanting to borrow the book.
Read more
2 people found this helpful
Helpful
Report abuse

Jo-anne Laframboise
5.0 out of 5 stars Making Up For Our Past Injustices
Reviewed in Canada on March 14, 2020
Verified Purchase
More folks should read this book. It needs more promotion. Working in the past with indigenous folks, I can feel the pain they have endured over time and we need to give back when and where possible with honesty and integrity.
Read more
3 people found this helpful
Helpful
Report abuse

Paul Goldsby
5.0 out of 5 stars Good read!
Reviewed in Canada on October 6, 2020
Verified Purchase
Was an important addition to my native studies/
Read more
One person found this helpful
Helpful
Report abuse

mgnlky
5.0 out of 5 stars Amazing read
Reviewed in Canada on December 4, 2019
Verified Purchase
Great collection of speeches given over the years.
Read more
One person found this helpful
Helpful
Report abuse

Jason Shamatutu
5.0 out of 5 stars Awesome read
Reviewed in Canada on March 1, 2020
Verified Purchase
Great compilation of lectures, speeches, and essays.
I am glad she wrote about steps forward.
Read more
2 people found this helpful
Helpful
Report abuse
See all reviews
Back to top
Get to Know Us
Make Money with Us
Amazon Payment Products
Let Us Help You
EnglishChoose a language for shopping. CanadaChoose a country/region for shopping.
© 1996-2022, Amazon.com, Inc. or its affiliates