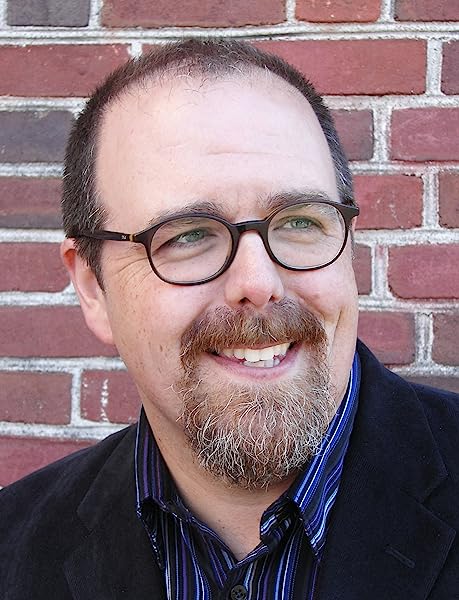 by Michael Rex (Author)
4.7 out of 5 stars 11 ratings
See all formats and editions
Sorry, there was a problem loading this page. Try again.

From the author/illustrator of Fangbone! and Goodnight Goon comes a zany and hilarious graphic novel that shines a light on the humanity inside all of us---even if you're a robot.

He's a super-nice kid in an ultra-mean world.
He believes even the worst people are good inside.
He'll always be there for you... even if you boot him out of your castle, pit him against a mechanical giant, put him on top of a pole in a lightning storm, and trap him in a booming dance party that lasts all night long.
He's Your Pal Fred.

In a brutal world far in the future where only the savage survive, a life-size toy suddenly activates. Fred was built to be a best buddy, and his relentless kindness never fades, even when everyone else is rude. Determined to make the world a better place, he has the bright idea to talk the two most powerful and battle-hungry warlords, Lord Bonkers and Papa Mayhem, into being friends. It's a mission doomed to fail, unless Fred can find a way to inspire everyone to play nice!
Read more
Previous page
Next page

"Fred weathers scorn, slime, and worse to make friends, reunite long-separated siblings, and show even fierce rivals a way to peace and forgiveness. A winning exhortation, earnest in its underpinnings at least, to be the change."
—Kirkus Reviews

"In a world of chaos and carnage, this robot carries a secret weapon . . . reward stickers! Another genius idea from one of my favorite graphic novelists."
—Tom Angleberger, bestselling author of Geronimo Stilton and Origami Yoda

"Michael Rex mixes Spielberg’s AI with George Miller’s Mad Max and translates it through the lens of a Sunday comic strip. Your Pal Fred is a fun spectacle that’s worth the journey. It’s impossible not to smile as we follow a naively sweet robot armed only with his relentless optimism."
—Rich Moyer, creator of Ham Helsing: Vampire Hunter

"Action, adventure, a beautifully illustrated post-apocalyptic wasteland, and a cute little robot named Fred who just wants you to “be kind.” This story has EVERYTHING! Michael Rex has a knack for balancing heart-pounding danger with a deep sentimentality, and with Your Pal Fred he does it again!"
—Michael Sweater, creator of The Wizerd

"Rex combines a silly, adventurous romp with a message about love and kindness. The illustrations capture the story’s energy; the action-packed spreads and jagged panels make for quick transitions during action sequences, and the cartoonish visual style turns mean characters into harmless goofballs. Perfect for fans of Judd Winick's Hilo series."
—Booklist

"A graphic novel with heart about meditation and good relations that will appeal to those who enjoy kooky characters." —School Library Journal

Michael Rex has written and/or illustrated over forty children's books, including Eat Pete,With Any Luck, I'll Drive a Truck (by David Friend), the #1 New York Times bestseller Goodnight Goon, The Runaway Mummy, Truck Duck, and the Fangbone series (which has also been turned into an animated TV series). He has a master's degree in visual arts education (K-12) and worked as a New York City art teacher for four years. He lives in Leonia, New Jersey, with his wife and their two sons.

4.7 out of 5 stars
4.7 out of 5
11 global ratings
How are ratings calculated?
To calculate the overall star rating and percentage breakdown by star, we don’t use a simple average. Instead, our system considers things like how recent a review is and if the reviewer bought the item on Amazon. It also analyzes reviews to verify trustworthiness.
Top reviews

Kyle beaudette
5.0 out of 5 stars Absolutely FANTASTIC
Reviewed in Canada on September 10, 2022
Verified Purchase
I teach grade 5, and I have a student that has become obsessed with this book.
It's beautifully designed and a wonderfully told story.
Read more
Helpful
Report abuse
See all reviews

SJ
5.0 out of 5 stars Hilarious and Kind, never ending thrills.
Reviewed in the United States on September 22, 2022
Verified Purchase
Everyone needs to get their child this book. Entertaining with a warmly wrapped message of kindness and taking the time to be a decent person. You never know, it just may save the world.
Read more
Report abuse

Mr. Daniel L. Fry
5.0 out of 5 stars The book kids need!
Reviewed in the United States on July 5, 2022
Verified Purchase
What a great little book! Awesome illustrations, great machines and backgrounds and wonderful characters too. Fred reminds me of my son who always turns a negative into a positive.
Read more
Report abuse

Read Everything
5.0 out of 5 stars Great read, important message
Reviewed in the United States on July 7, 2022
Verified Purchase
Fantastic art and adventure while Fred spreads his message to be kind.
Read more
Report abuse

VALERIE OLPP
5.0 out of 5 stars Great read for young and old!
Reviewed in the United States on June 20, 2022
Verified Purchase
Excellent graphic novel with the message of positivity and kindness. Anxious to share with all my grandchildren.
Read more
Report abuse
See all reviews